Last Sunday was the second of the four Waterside races, with a large turnout of 31 Richmond paddlers taking on Waterside B over a distance of 18 miles with 19 portages. At the top end of the race, the battle for the title of fastest Richmond crew continued from Waterside A. Freddie and Alex came out on top again, taking 2nd in senior men’s k2 in 2:07 and (temporary) bragging rights, leaving Richard and James to settle for 4th in 2:09. Recent heavy rainfall made the river sections of the canal very fast flowing, with Freddie and Alex using this to their advantage as they portaged large sections of the upstream half to gain time.

They were followed 3 minutes later by Will & Chris who were paddling together for the first time and finished 12th in 2:34. The ever dependable Mike & Graham finished 21st in 2:49 but were no doubt slowed down by the “technical swim” suffered at a portage (apparently waist deep doesn’t count as a real swim).

Meanwhile in mixed K2 Steve and Lizzie finished 1st in 2:12 and broke the course record from 1992 by 5 minutes. In the ladies K2 class Nettie and Anna finished 2nd in 2:45, followed by Klaudia and Kasia who were 4th in 3:08.

Not to be outdone, Mike and Thor took 2nd for the third week in a row in the C2 class, and were followed by Sean and Malek in 12th (3:27). Our sole veteran K2 boat of Neil and Anthony finished 21st in 3:25. There were 2 crews in ladies K2 making their Waterside debuts- Amy & Tamsin and Laura & Mandy both finished successfully well under the four hour mark. Our final ladies K2 of Nicole and Tanya were forced to retire after a low bridge related injury – “no blood, just a hefty whack”, according to Peter.

Over in the K1 classes, clearly on a high from his chicken and chorizo galley success, Tom won the senior mens K1 by two minutes in 2:17, despite spending “at least 10 seconds” helping a swimmer. In the junior K1 Nick Romain was a close second behind his usual K2 partner in a quick time of 2:21, just outside the junior course record which bodes well for the season ahead.

Isaac was missing his usual K2 partner and opted to race K1 instead, and did well to finish 8th in 2:43 in what was probably the furthest he has paddled in K1. Across in the ladies K1, Beth finished 5th in 3:18, well in the top half of a competitive field, and reportedly super quick on the portages. Finally, in veteran K1, John completed the Richmond line up and got round the course in 4:02 – not bad in a Rapide!

Next on the agenda is Thameside 2, which will be an absolute treat in the anticipated sub zero temperatures. Don’t let anyone tell you pogies are not allowed. 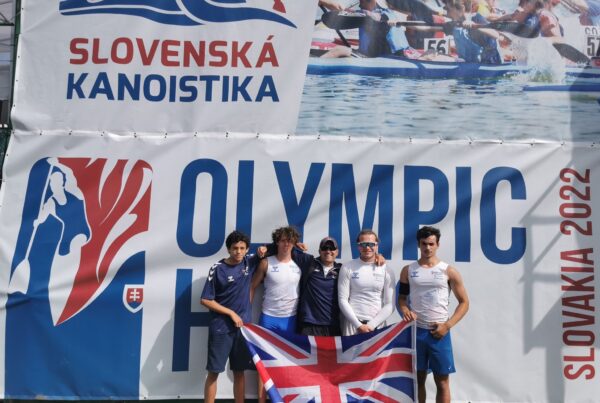